Sergio Ramos Joins PSG On A Two Year Deal Until 2023

"I am very happy to join Paris Saint-Germain," Ramos said.

by Jafta Motswalo
in FOOTBALL, SPORTS
0

Sergio Ramos will join Paris Saint-Germain after agreeing a two-year deal at the club, it was announced on Thursday. Ramos, 35, left Real Madrid when his contract expired on June 30 after failing to agree an extension, bringing an end to 16 years at the club.

“I am very happy to join Paris Saint-Germain,” Ramos said.

“This is a big change in my life, a new challenge and it’s a day I will never forget. I am very proud to be a part of this ambitious project, to be a part of this squad with so many great players. Paris Saint-Germain is a club that has already proven itself at the highest level. I want to continue to grow and improve at Paris and help the team to win as many trophies as possible.”

💬"I'm coming with the desire to work hard and win. These are values that represent the club well. I am happy to be part of this great club"

Ramos had wanted a two-year deal. His wages at PSG are set to be lower than what he was earning in Spain and what he would have earned had he stayed at the Bernabeu. The defender claimed he “never wanted to leave Real Madrid” and said that after drawn-out negotiations, he had wanted to accept a one-year deal, only to be told the club’s offer had been withdrawn.

“It wasn’t a financial problem. They offered me one year, I wanted two,” Ramos said at his Real Madrid farewell news conference on June 17. “In the latest conversations I accepted the offer with a pay cut, and I was told there was no longer an offer. It had an expiry date and I didn’t realise. It surprised me.”

Nasser Al-Khelaifi, Paris Saint-Germain chairman and CEO, said: “Today, Paris welcomes one of the greatest players of our era. We are delighted to announce that Sergio Ramos has joined us. Sergio is a complete footballer, one of the best defenders in the history of the game.

“He is a born competitor, a leader and a true professional. His vast experience and ambition is in perfect synergy with those of the club. I am proud to see him in a Paris Saint-Germain jersey and I know our supporters will reserve a fantastic welcome for him.”

It earlier reported that Ramos was considering approaches from PSG, Manchester City and Bayern Munich and was keen to choose a destination sooner rather than later, with family considerations being an important factor in his decision-making.

“I haven’t thought about any team at the moment,” Ramos said last month. “But it’s true that since January, when I was free and on the market for contractual reasons, we’ve had calls to my brother [agent Rene Ramos] from interested clubs. We’ll look at a good option for me.”

Ramos began his career at Sevilla and signed for Real Madrid in 2005 aged 19, going on to become one of the most important players in the club’s history. 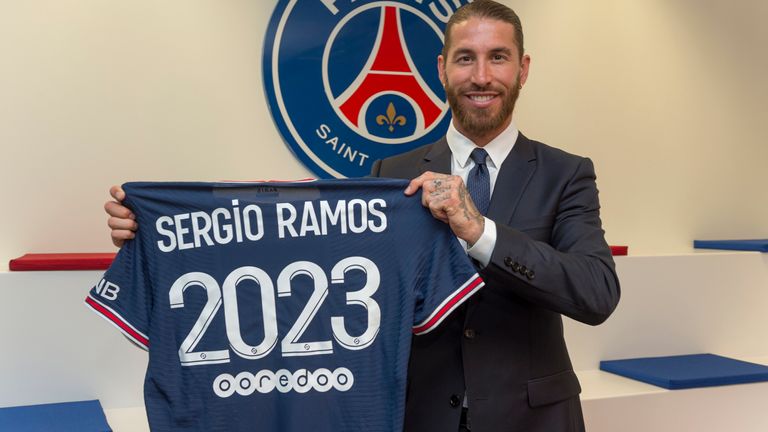 The centre-back made 671 appearances for Madrid, scored 101 goals and became club captain in 2015 after the departure of Iker Casillas. He won 22 trophies with Madrid including four Champions League titles — scoring a crucial 93rd-minute equaliser in the 2014 final against Atletico Madrid, as well as the opening goal in the 2016 final — five La Liga titles and two Copa del Rey titles.

He was also a part of Spain’s most successful national team ever, winning Euro 2008, the 2010 World Cup and Euro 2012 as La Roja became the first squad to win three successive international tournaments.

Ramos will look to regain his best form in 2021-22 after his contribution in 2020-21 was limited by a series of injuries. He made 15 La Liga appearances last season — by far his lowest tally as a Real Madrid player — with just two of them coming in 2021, and as a result was left out of Spain’s Euro 2020 squad by coach Luis Enrique.

Ramos joins his old rival and somewhat friend Neymar and former teammate Hakimi. This is PSG’s fourth major signing after they captured Hakimi, Donnarumma and Wijnaldum.

PSG will be aiming to make a big run in UEFA Champions league this upcoming season after reaching the final and Semis respectively in the last two seasons.

The $100 million Super League was introduced by the Confederation of African Football (CAF) on Wednesday in an effort to give the continent's cash-strapped clubs some financial clout. Patrice Motsepe, the president of CAF, thinks that the League will increase revenue for African football. According to Motsepe, the competition will also make sure that players from the continent are paid fairly so they won't play European football. The competition is scheduled to begin in a year, but it is still unclear how it will operate and which teams will participate. "The...

Boks beat the All Blacks

Prior to the match between Springboks and the All Blacks, it appeared to be a battle between beauty and beast....

Benni McCarthy, a legend of the Bafana Bafana national side, has joined Premier League powerhouse Manchester United as a first team coach. On Saturday night, the club tweeted to confirm the news. READ ALSO:ANC members to disrupt conference over unpaid salaries McCarthy (44), who holds the record for most goals scored in his nation, is the only South African to have won the Champions League while playing for FC Porto. He has previously played professionally in England for Blackburn Rovers and West Ham. He has achieved success locally with Cape Town City and AmaZulu since entering the coaching field. In the 2020–21 season, when Usuthu finished second and earned a spot in the CAF Champions League for the first time in club history, he guided the KwaZulu-Natal club to its best result in the Premier Soccer League era. McCarthy previously worked with Cape Town City, when he won the MTN8, and served as the assistant coach for the Belgian team Sint-Truidense in 2017. Fans online have responded to the legend McCarthy joining Manchester United with both enthusiasm and shock. McCarthy, a devoted United supporter throughout his entire life, consented to work with Erik Ten Hag. Some supporters were left wondering how the former Ajax Amsterdam, FC Porto, and Blackburn Rovers striker will mesh with Cristiano Ronaldo, while others believe McCarthy's expertise will be very helpful to United's young forwards.

The South African football association (SAFA) president Danny Jordaan said Banyana Banyana will be rewarded with more than a R9.2...

Banyana Banyana defeated the hosts Morocco 2-1 on Saturday to win the Women's Africa Cup of Nations (Wafcon) for the...

The SASOL-sponsored Banyana Banyana are through to the final of the Women’s Africa Cup of Nations (WAFCON) after beating Zambia...

After Simiso Buthelezi appeared disoriented in a bout, during a boxing match that took place on Sunday in Durban. Boxing...

Although it was an open secret, the Keizer Chiefs announcement of Arthur Zwane as Head coach and Dillon Sheppard as...

Malema: “We Strictly Do Politics, Not Personal Vendettas”

Romelu Lukaku Is Back In Chelsea Blue!

No Result
View All Result

Are you sure want to cancel subscription?